Since conference is right around the corner, we are going to be gearing our activity next week towards that.  Here are a few links that you might find useful in preparing a General Conference activity. 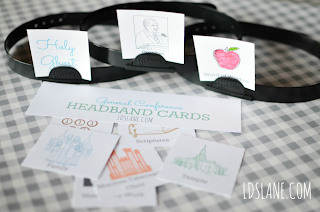 Another game you could play comes from Cookie Nut Creations. 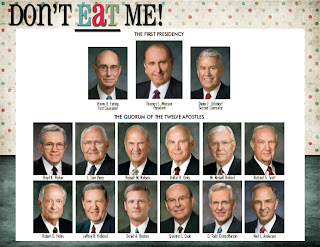 This is based on the game Don't Eat Pete.  Here is her description of the game:

Priesthood Leaders; "Don't Eat Me"
This is based off the ever popular game "Don't Eat Pete".  For this game you will need some easy to eat candy, or you could also use chocolate chips, marshmallows, fruit snacks, goldfish crackers, etc.  Using the provided image below, place a piece of candy on each individual person.  Then, send the person who is "it" out of the room while the remaining people choose a priesthood leader who's candy piece shouldn't be eaten.  Once a leader is picked, bring the person who is "it" back into the room and let them start eating the candy.  If they start to eat the candy off of the leader that was picked everyone yells out "Don't eat me!" or "Don't eat Jeffery R. Holland!" (for older kids).  Now it's someone else's turn to be "it".

We will also be making a variation of these conference notebooks from Cinnaberry Suite. 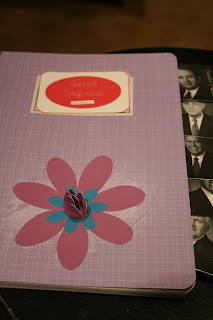 Because there will three new apostles, we will probably forego the pictures and just do names, leaving a space to write in the names of the newly called apostles.

On that topic, this is a great opportunity to teach the girls how a new apostle is called.  I love how simply Elder Christofferson explained it this week.
Elder Christofferson said the selection and calling of new apostles to the Quorum of the Twelve is the prerogative of the president of the church.
"President Monson, I don't know if this always has been the case, but his practice has been to ask each of his counselors and the members of the Quorum of the Twelve to give him names they would recommend for his consideration, not to discuss with each other but just individually, to give him whatever name or names they feel impressed he ought to look at," he said.
"What process he goes through exactly, I'm not sure. That's, again, something private he pursues. He then brings back, when he's reached his decision and had the inspiration he needs, the name or names to the council that we have of the First Presidency and the Quorum of the Twelve Apostles to sustain it. That goes forward to general conference."
In April 2009, President Monson selected Elder Neil L. Andersen as a new apostle after the December 2008 death of Elder Joseph B. Wirthlin.
"I recall this last time around when Elder Neil L. Andersen was called," Elder Christofferson said. "Before that happened, we were just discussing casually before one of our meetings of the Twelve about the vacancy, and I remember President (Boyd K.) Packer saying, 'We don't have to worry, President Monson knows how to get revelation.'
"That's what it is, a revelatory process in the end. Different prophets may approach it in different ways, but in the end, it's finding out from the Lord who he wants."
You can read the entire article here.
Here are a few other sources that explain the process:
President Hinkley shared the process during a conference talk.  This video is worth sharing with the girls-

This reference is easy to break down and share with the girls.

Please copy our ideas or change them up to make them your own! Here is a great starter pack for a new Activity Days leader, or someone wanting to get more organized!